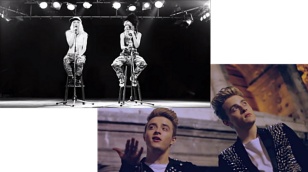 Another week of X Factor, and still more comparisons between Jedward and Blonde Electra.  In previousarticles we’ve said that Ruby & Jazzy are nothing like John and Edward – we have since revised our position somwhat.

We’re not saying that they’re similar.  We still maintain that the only thing the girls have in common with the Dublin Duo is that they’re siblings and bottle blondes.  But Blonde Electra, as John and Edward and many ohers before them, have been misrepresented by the X Factor.

Have you seen this?

Yes. That’s Blonde Electra.  They can sing.  They are actually quite talented.  Likewise, John and Edward:

Yet both acts have been represented as a novelty by the X Factor.  Louis Walsh is quoted as saying:

“People are calling them the female Jedward but they are no comedy, they are just different.”

Guess what Louis? John and Edward are different too. They’re…