Beam Me Up! It’s Jedward and William Shatner! | JackCrute.com 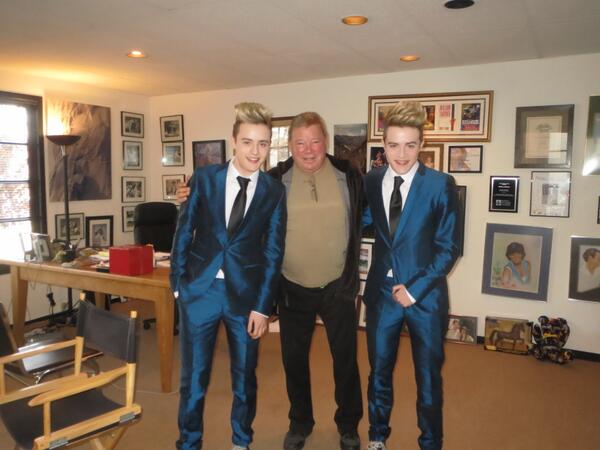 Beam Me Up! It’s Jedward and William Shatner! | JackCrute.com.

Stranger things have happened, but surely not many stranger – and unexpected – than the friendship between Jedward and William Shatner.

But this is life on Planet Jedward we’re talking about, so we’ve grown to expect the unexpected.

A few months back, after being asked by a Jedward fan to look into them, William Shatner started following the Twins on Twitter.  They returned the favour, and since then the trio have kept in contact.  In Los Angeles at the moment where they are finishing up recording their fourth studio album, John and Edward met up with the great man, and posted the above picture, captioned:

Great talking to William Shatner @WilliamShatner Thank you for all your wise words! Peace Out Jedward pic.twitter.com/8TltytIp1u

@planetjedward It was such great fun meeting you! Bill

Tickets went on sale yesterday (January 31) for Jedward’s next concert, at Dublin’s Olympia Theatre, on April 20.  You can buy them from the Olympia’s box office and from Ticketmaster.