John and Edward made a whistle-stop visit to Amsterdam on Sunday for the MTV EMAs, winning hearts and fans along the way!

First stop was Schipol Airport, where they were met by both their own fans, and those of KPop group, Exo, who had been waiting for arrival of the Korean/Chinese group for as long as two days. The Exo fans are lovely and very dedicated to their idols, but were nonetheless quite impressed by the fan-service of the Dublin Twins, who spent nearly 2 hours at the airport making sure everyone had a photo, a hug and a chat with them.  John and Edward also showed off their great knowledge of KPop, and mentioned that their song “Cool Heroes” was written and produced by one of the writers of the Exo song, “Wolf”.

After Schipol, John and Edward went to their hotel, and then went shopping in the area near the Ziggo Dome, again taking photos with lots of local people.  The Twins are primarily known in the Netherlands for their two appearances at the Eurovision Song Contest, and they also performed last year in Amsterdam at the Melkweg, as part of Eurovision in Concert.  Their music is lately starting to take off in Holland, with “Luminous” on the playlist of Radio Diego.  Other radio stations will surely soon follow suit.

The Twins made a grand entrance on the red carpet of the EMAs, from where they were ushered to the VIP “Glamour Pit”, and seated directly behind Katy Perry.  John and Edward know Katy reasonably well, and the trio last got together at the after parties of this year’s Grammys.

Additionally they were photographed with Miley Cyrus (no doubt finally resolving the question of whether Miley based her hairstyle on theirs), American rock band 30 Seconds to Mars, and, Kris and Suho from Exo – the Twins tweeting later that they had said to the pair how great their fans were, and that they were going to make it their mission to get Exo on Twitter – which no doubt pleased the Exo fans a lot! 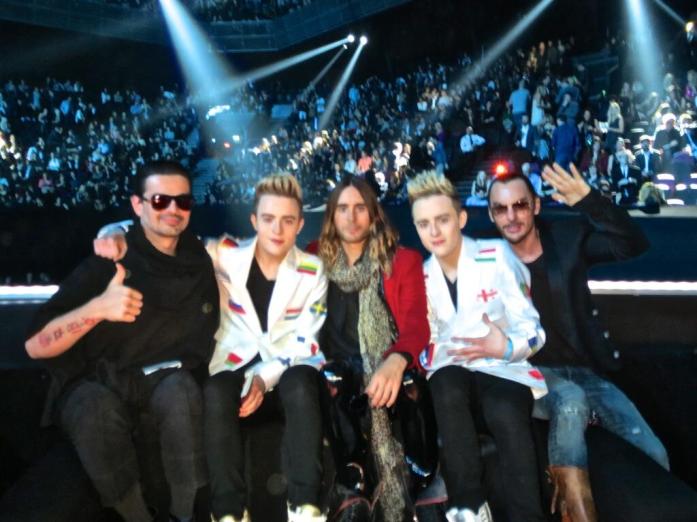 John and Edward will visit Australia in the next few weeks, where they shall be doing three concerts on their first promo tour outside Europe.  Tickets for the shows in Perth and Sydney (23 November and 1 December respectively) are available from Ticketek, with tickets for their 30 November concert in Melbourne from Ticketmaster.